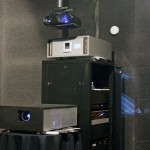 Tom Norton, always the CEDIA trooper with Sound and Vision Magazine, visited our demo theater and had some nice things to say about our SDC-6 […  in his CEDIA wrap blog…]:

“More than a few projectors impressed me at the show, but two stood out among the even remotely affordable. The SDC-6 from Wolf Cinema isn’t new, but at $6,000 it presented a bright and pleasing picture on 112-inch [sic, 122-inch], 0.85 gain screen.”  His complete article can be seen at http://www.soundandvision.com/content/cedia-expo-2014%C2%97-wrap

“…  the company demonstrated three of its models at CEDIA. In the photo above, the uppermost projector is the SDC-6, a 1080p single-chip DLP projector that outputs up to 2200 lumens. Below it is the SDC-12, a D-ILA/LCOS projector (a rebranded JVC with e-Shift) with up to 1300 lumens of light output, and the remaining unit is the SDC-40, a 1080p 3-chip DLP design just introduced at CEDIA that can output up to 3000 lumens.

The demo included three clips, one on each of the three projectors. First up was a clip from Lone Survivor on the SDC-6 (Blu-ray from the T+A K8), followed by some 4K footage from Red Reel on the SDC-12 (from the RedRay player), and then a clip from Africa on Blu-ray was played on the SDC-40 (Blu-ray from the Oppo).  “All three looked excellent, with nothing whatsoever to complain about…”