Wolf Cinema has consistently offered the best home theater setups at CES’s Venetian hotel venue. That’s probably not saying much, as the displays at the convention center are dominated by flat panels and the Venetian is mainly high-end audio heaven. CEDIA EXPO, held in September, is the show for projector-based home theater demos. 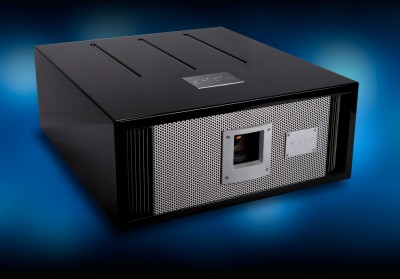 But the three projectors Wolf demonstrated, the SDC-6 and SDC-12 (the latter an e-Shift 4K design based on JVC’s D-ILA designs) and a new, as yet unnamed prototype, all looked terrific on a 120-inch diagonal, 2.35:1, 1.2 gain, SI Slate projection screen. Great sound too, from Elac speakers and REL subs. (German speaker manufacturer Elac now has a new U.S. distributor.)

The prototype projector was an LCOS (e-Shift) design. It uses laser illumination rather than a projection lamp. It looked bright and crisp, with great color and no obvious issues. No availability date or price yet, but it’s likely to be north of $30,000.