CEDIA 2019: AudioControl Flexes Its Muscles – Many New Models, All with a Dramatic New Design

AudioControl flexed its muscles this year at the 2019 CEDIA Expo – launching the greatest number of new products ever in the company’s history. But not only that, the company surprised us with an entirely new industrial design across a wide swath of products that is sleek, savvy, and exciting.

Weeks ago, AudioControl announced that at the then-upcoming 2019 CEDIA Expo, they would be unveiling the newest products ever in the company’s history. It sounded, frankly, a little bit like hyperbole…the kind of stuff that those of us in the media get all the time as a show is approaching. But in the case of AudioControl…they weren’t kidding.

At their Expo booth earlier this month, I saw display after display filled with many new models…all wrapped in a sexy new industrial design. You can see more of the details on these new models in my post here… 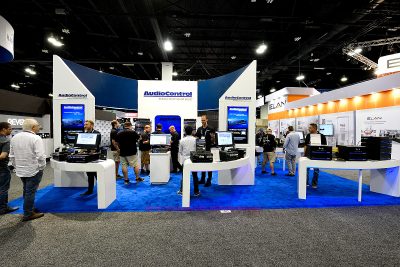 I’ve been following AudioControl now for a few years, and have been impressed by some of the initiatives launched by owner Alex Camara and his entire AudioControl team. Several years back, Alex told me the company was planning to enter the home theater AV receiver category.

I was openly skeptical…asking, “Are you sure you want to do that?” Before then, the company competed against a highly fragmented group of competitors offering a wide variety of black-box solutions. AudioControl had a strong reputation in the automotive electronics side but we’re still working on building their residential street cred. Entering the AV receiver business opened themselves up to an entirely new class of competitor – not the least of which was strong product offerings from a roster of Japanese brands…as well as high-quality products from a select few other American-based specialty suppliers.

Built a Program Optimized for Integrators

But AudioControl was smart, designing high-quality products that were priced profitably and clearly targeted at the integration channel. Little by little, they grew their share of the segment…and are now better positioned than most of their competitors to continue to grow their share of the market.

“We now have a strong foothold in the home theater business. We have products that offer Roon endpoints, whatever streaming service you want, WiFi & Bluetooth, all channels are assignable…and we’ve done a total redesign with an all new silicon platform.”

Camara went on to note that they are a fully supportive supplier to the custom integration channel – with super clean distribution. They have no retail, no distributors, and no internet sales of AudioControl products – three important “no’s” for custom integrators who are looking to support lines that offer protected margins.

When I visited the AudioControl booth at CEDIA Expo 2019, I was quite blown away by the breadth of the launch of new models – all with a new, savvy industrial design. This design is sleek, professional, but with a slim backlit blue accent line that looks great. My photos here don’t really do it justice as I only had enough time to grab a few shots. For those of you who know photography – to shoot photos of black boxes that are properly exposed, you have to go with a more open aperture and longer exposure.

This makes the backlit blue accent stripe in AudioControl’s new industrial design look a little too prominent in my photos. Also, the color is not consistent. This is the fault of my photography…NOT their design, which is really very attractive.

For a specialty supplier like AudioControl, this is a lot of new products and a lot of upfront investment. But from what I saw, it looks like it will totally pay off in the long run.

See more on AudioControl and its new line of products by visiting: www.audiocontrol.com.