I’m sure you can think of examples to the contrary, but the fact that you have to really sit down and think about it to rattle off more than a handful kind of proves my point. However big your list may be, though, it’s time to add two more products to it. AudioControl’s new Rialto 600 and Bijou 600 Zone Amplifiers may not look like much. In fact, aside from the undeniable Sonos-like aesthetic of the Rialto, they’re pretty much just unassuming little black boxes. But inside these diminutive beasts, you’ll find 200 watts (into 8 ohms; 400 watts into 4 ohms) of high-quality Class D amplification, Wolfson digital-to-analog conversion, slick bass management capabilities, and AudioControl’s patented AccuBASS processing to boot.

The Rialto 600All of which sounds reasonably impressive, but it isn’t until you take a gander at the back of these units that you really get a sense of just how deliciously integration-focused they are. In addition to their pair of digital audio inputs (with your choice of coax or optical for each), there’s also a stereo analog input, a 12-volt trigger, RCA bridged mono and LFE outputs, and more toggle dipswitches than you’ll likely ever need on any given job. There’s also 3.5-millimeter IR inputs and outputs, and an RS-232 connection. (AudioControl provides drivers for Control4 and RTI control systems on its website.)

Really, the only difference I can tell between the Rialto 600 and Bijou 600, aside from their form factors and intended installation locations, is that the former features two sets of incredible, fancy, five-way binding posts (which are not only gorgeous but also handled 12-gauge speaker wire just fine in my testing) and a bottom-mounted cooling fan, whereas the latter sports a phoenix connector for its speaker-level outputs and a mountable 1U half-rack design. (It can also be mounted behind a TV or in a wall cavity box with optional hardware, sold separately).

Because the two are so utterly similar, and because the Rialto 600 aligns a little better with my needs for such a product, I leaned on it for the bulk of my testing, using it essentially as a preamp/DAC/amplifier for my desktop-based two-channel system in my home office. Both Zone Amplifiers come with a handy optical digital audio cable, which wasn’t quite long enough to reach from my Maingear PC around to my pair of GoldenEar Triton Ones, so I brought my own optical cable to the party. 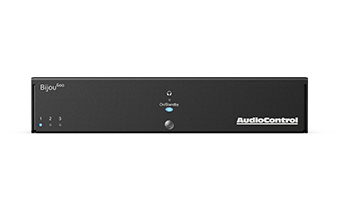 The Bijou 600Is a pair of massive audiophile tower speakers with 650-watt power handling capabilities really the sort of setup that AudioControl intended to be paired with the Rialto or Bijou 600? I honestly can’t tell you. What I can say is this: the amp didn’t flinch when driving the GoldenEars. Not a bit. Nor did the speakers feel in any way underpowered as I cranked out a slapdash variety of tunes running the gamut from Grateful Dead bootlegs to Ingrid Michaelson to Fatboy Slim. There was a wonderfully satisfying punch with all of it, not to mention a clarity that I wouldn’t have expected from such a little amp. And while this straight two-channel setup didn’t allow me to experiment much with the Rialto 600’s different configurations, it did give me a chance to test out AudioControl’s AccuBASS processing in its purest form.

AccuBASS is engaged via the included (itty-bitty) remote and can be dialed up or down much the same way a standard bass control might be. To my ears, though, it isn’t simply a bass boost. It added not only volume, but also weight and dynamics to the bass, and in most cases, I found it best used sparingly, if at all. Where it really helped was with beloved but hard-to-listen-to albums like the notoriously bright and thin Tesla album The Great Radio Controversy.

With the Rialto 600/Triton One system still hooked up, I also connected the Bijou 600 to a pair of Paradigm Prestige 15B bookshelf speakers and Artison’s little RCC Nano 1 subwoofer, which gave me a chance to test out its bass management capabilities. Given that bass management is handled via back-panel dipswitches, you’ve probably already guessed correctly that you can’t adjust the crossover frequency. There’s one switch to engage an 80 Hz high-pass for the speaker-level outputs, and another for an 80 Hz low-pass on the LFE output. That turned out to be the perfect crossover point for these speakers, though, and no doubt for most any 2.1 speaker system you might tie to the Bijou or Rialto.

The real fun began when I started digging through AudioControl’s truly awesome instruction manual for clues as to how to make use of the rest of the dipswitches: Bridged Mode, Sleep Defeat, High Gain, and individual Volume Defeat for each of the three inputs.

The Rialto 600 features fancy five-way binding posts and, like the Bijou 600, is packed with toggle dipswitches.

Two of those, in particular, were crucial to another setup, in which I used both the Rialto 600 and Bijou 600 in the same stereo system. I used the Rialto to drive the main stereo speaker (the Paradigm bookshelves again), with the highpass and low-pass filters flipped on. Instead of running the LFE output to a sub, though, I ran it to the Bijou 600’s analog input, with its Volume Defeat engaged, Bridged Mode turned on, and the speaker-level output routed to Beale Street Audio’s excellent ICS8-MB passive subwoofer.

In this case, I had exactly the opposite concerns that I did with the Triton One system: 400 watts of amplification is way more than the Beale Street sub is rated to handle. But a careful hand on the volume control of the Rialto 600 kept things from getting explodey at all, and quite frankly the system straight up rocked my face off. And that’s just one of the possible setups suggested in the (again, ridiculously entertaining and informative) manual.

If I have one beef to pick with these incredible little Zone Amps, it’s that they lack any sort of USB audio input. That’s understandable, given that they’re both positioned (and designed) as small pieces in a much larger whole-home audio puzzle. In fact, the back panel is so crowded with connectivity and setup switches that I’m not sure there’s really room for USB, even if it made sense for the amps’ intended functions. Maybe if AudioControl ditched the headphone output? I dunno. What I do know, though, is that I’m picking nits here. These amps are absolutely incredible.

Incredibly flexible, high-performance amps that perfectly straddle the audiophile and custom installation markets, with a wealth of integration features